This week sees the online conference called Collab365 http://www.collab365.events/ which is run over 24 hours with sessions from great names from around the SharePoint and Office 365 community.  Alongside at the same time of the record sessions, there are live sessions part of the Collab TV hosted by different people from around the world.

I’m delighted to be speaking on a hot topic with is ‘are teams sites dead’ but we wanted to do something a little different!

Mark Stokes and I have had many debates about the future of team sites and during one evening I pitched the idea to turn this into a battle during a live sessions at a conference.  Collab365 will be round 1 and I hope to take an early lead in convincing you that it’s time for us to move away from team sites and think differently.

Come register and listen along at 5.45pm UK on Thursday and hear the battle.

“Are team sites dead?!!  A big question that has been asked for some time now as the Office 365 platform has changed and developed.  Today the heat is on as the battle between Alex Pearce (Office 365 MVP) and Mark Stokes (SharePoint MVP) fight for your vote but whos side are you on?  Do you we stick with the traditional SharePoint team sites or do we need to move away from Team sites to Office 365 Groups or are there other options?  Our host Andy Tablot will be the ring master while the two sides battle it out and you crown the victor at the end.” 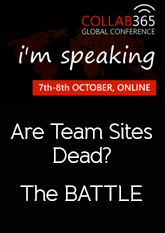