BFC Networks are delighted to start working with EduGeek by sponsoring the newly created Windows 10 forum.

EduGeek is a growing community for Education Technology workers ranging from IT Coordinators, IT Managers and technical support staff in schools and colleges around the world. With BFC Networks increase the number of users across the country and world we feel it time to help support such a great community

When asking our Managing Director Alex Pearce he said

“Over the past 10 years of working in the education space both directly for Schools, BSF and now BFC Networks, EduGeek has always been a key community to me and have always tried to do my part in the for it’s members.  When an opportunity to sponsor EduGeek and the Windows 10 forum I wanted us to jump at this opportunity which we did hope this becomes a long term opportunity.  I hope this is a long term relationship with the leadership team and members so all get to benefit.  I’m a geek at heart and a EduGeek at that.” 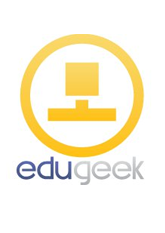 BFC Networks have been working with different customers throughout the UK to understand their needs when deploying Office 365 into their education establishment.

As we see more uptake of some of the core products in Office 365 such as Exchange, SharePoint Online and OneDrive for Business we have seen make requests and concerns around accessing students OneDrive for Business.  When asking customers what they would like to be able to do they have replied with.

Today I’m pleased to announce our first app for Office 365 called the BFC OneDrive Configurator available for purchase as of today.  This app answers all the questions above allowing you to control who and what features you want in OneDrive for Business. 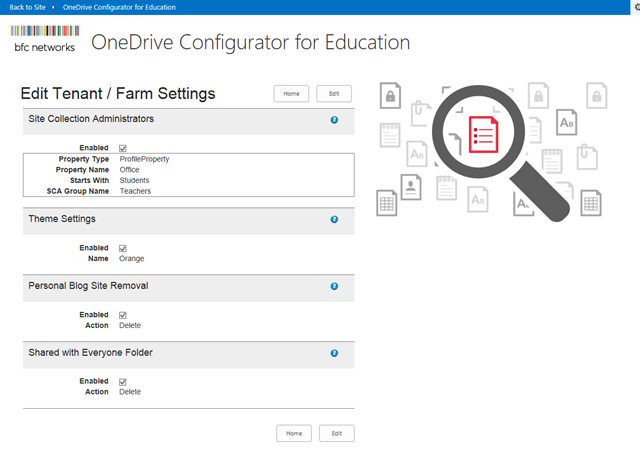 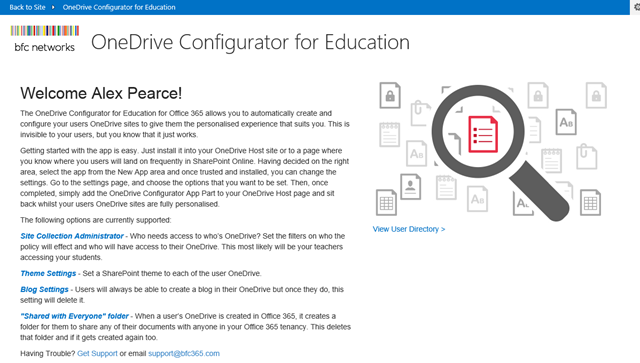 Get in touch for more information including any requests so we can build the additional features you want into BFC OneDrive Configurator.

BFC Networks are proud to announce that the BFC365 offering for Office 365 Education is being made available through the South West Grid for Learning Trust and for schools and councils within the area.

Together working with Groupcall and the Trust, we are delighted that we can work as a partnership offering identity, eLearning solutions and technical and teaching support for their schools.

BFC Networks will also be working with the Trust to migrate schools current email service to Office 365 Education allowing students and staff to access their mail from the 24/7 service with an increase to the 50GB mailbox limit.

Alex Pearce the Managing Director from BFC Networks commented “We are delighted to have signed up with the South West Grid for Learning and look forward to working with them, Groupcall and their schools in this new project.  Office 365 Education provides so much for any establishment and working with all the partners on this project, we know we can offer the best services to any of the schools in the region.”

If you are interested in signing up through the SWGfL please register your interest here: www.swgfl.org.uk/365interest

Warwickshire County Council are moving their schools to the cloud with Office 365.

Who is it for?

The new WeLearn365 service for Warwickshire Schools has recently been launched, providing the county’s schools with a new Education service built on Office 365 Education.

The portal gives schools “80% of the features of most VLEs, but delivers 80% of what schools actually need”.

The system provides 25GB inbox per teacher and integration of the new Office Web Apps. By making familiar Office applications available from any browser, WeLearn365 will make learning far more accessible from a range of different devices and for families who cannot afford to license a full copy of Office2010 in their homes. How does it work?

Schools plug-in online content and apps from a variety of sources to be used by teachers and students, both in the classroom and at home. Warwickshire and BFC networks have also developed the system to integrate the schools MIS data from Capita SIMS, which is hosted on a Microsoft SQL server farm at the Warwickshire HQ. By mixing some key “in county” private-cloud services for student data, with best-of-breed Microsoft public-cloud services from Office365, they’ve been able to achieve a very compelling proposition at a significantly lower cost than most traditional VLEs or school portals. The interface was built with templates in SharePoint Online, enabling schools to quickly customise and personalise their own site with their school colours and logo.

The Warwickshire team and Microsoft partner BFC Networks have turned the generic SharePoint service in Office365 into something friendly and usable for any school.

All teachers and students across Warwickshire will also have access to a top level WeLearn365 site, enabling collaboration and sharing of best practice across the county. BFC Networks are very proud to announce the shirt sponsorship of Abingdon Youth Under 7s boys and girls football team. 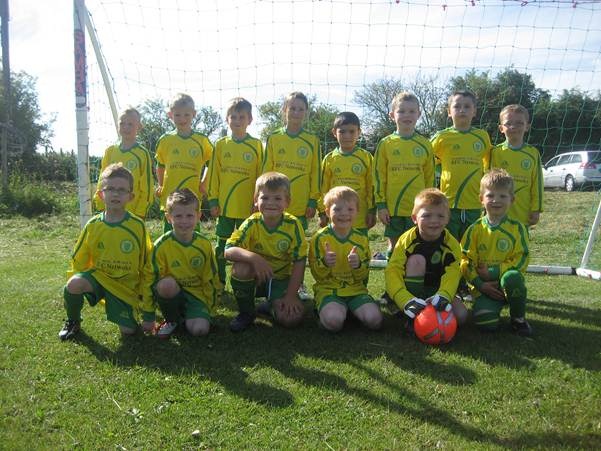 Following the successful sponsoring of Birmingham Citadel FC last season we are delighted to be helping out Abingdon Youth FC with their first ever football kit.

Each member of the team were given their own strip on their first training session back after the summer break and the picture above shows them ready for action before the start of the league the following Saturday.

We wish you all the best for the new season and hope to see you all playing in the Premier League in the future.

Over the past few months BFC Networks have been working hard to change the way SharePoint looks in the education space.  By default SharePoint is very bland and doesn’t love much in its role to engage users.

At BETT 2012 BFC Networks were proud to have Microsoft use the design on their stand to demonstrate how SharePoint doesn’t have to look like it doesn’t out of the box but instead it look existing, engaging and relevant to the education sector.

We are announcing today that we are now offering the design to any schools with SharePoint 2010 allowing them to change their environment to look attractive for their school.  The design will be available in the BFC Shop in a few weeks times but orders can now be taken.

If you like the design and want to use it for your SharePoint 2010 please get in touch by emailing info@bfcnetworks.com and we look forward to hearing from you. Click image to see full view of the image.

During the prize giving at SharePoint Saturday BFC Networks gave £250 towards a charity of choice to someone at the Conference. The winner was picked at random and they have selected Pratham UK who work to increase the accessibility and level of education in India.

During the week since SharePoint Saturday we have been in contact with Pratham about the donation and have been advised that if the donation is made during the 5th – 9th December through the Big Give website the amount will be doubled.

We hope that every penny can be used to help this great charity.

We are very pleased to see the eBook being sold and schools and businesses getting back to us about their experiences during and after implementing Moodle in their Microsoft environment.

Gavin Henrick is a solutions consultant based out of Dublin, Ireland who works with assisting organisations to implement a range of open source products such as Moodle and Mahara.  Gavin is also an author of Moodle 2.0 books include Moodle 2.0 for Business Beginners Guide and has given us a review of the our first ebook on his blog.

‘Overall the book provides clear guidance on the technical setup for each of the tasks. If you are faced with having to deploy Moodle 2 internally on a Microsoft platform without any external help, then this is a book that will certainly help you in the right direction. And, for the price of a few beers, it is well worth it.’

You can read the full review on his blog – click here.

If you are interested in purchasing this ebook in PDF, epub and mobil version you can from the BFC Networks shop. Over the course of the summer, Alex Pearce the Managing Director of BFC Networks has been writing a downloadable eBook based on Moodle 2.0 with Microsoft technologies.

This book has specially been designed and written for technical staff who are looking at using Moodle 2.0 and wish to implement and integrate the website with Microsoft technologies.

The first two chapter look and guide you through implementing the PHP based website on the Microsoft operating system Windows Server 2008 R2 on a single server and a highly available environment including 2 web front ends and a Microsoft SQL Server Cluster.

To ensure best practice, Alex has talked about creating new user accounts which then require special permission to Active Director ensuring your environment is secure at all times.

The book is available from the BFC Networks Shop for $15.00.